Growing up in Leningrad (now St. Petersburg) during Soviet times, Eugenia Lvova always felt strongly connected to her Jewish identity. But she never could have imagined leaving her career as a computer programmer and becoming a full-time Jewish professional. Religion was squelched in the Soviet Union, and Jews were not able to explore their heritage.

Then, the Soviet Union collapsed. Eugenia began volunteering with new, local Jewish organizations. Together with a group of young, Jewish friends, she formed a circle that was committed to gaining and sharing Jewish knowledge in St. Petersburg. That circle grew into Adain Lo, which went on to open a network of 10 Jewish kindergartens, a Jewish camp, and programs for children with special needs – impacting about 10,000 children in total.

But Adain Lo still faces challenges. While St. Petersburg is home to approximately 100,000 Jews, the city does not have a unified Jewish community. Also, many Jews still lack Jewish education because of the Soviet Union’s lasting effects.

So, when Momentum asked Adain Lo to become a Partner Organization, Eugenia was excited about the opportunity.

“We knew that if we could reach more Jewish mothers and strengthen their Jewish awareness, then they would bring more Jewish life into their homes, influencing their families and communities,” said Eugenia. 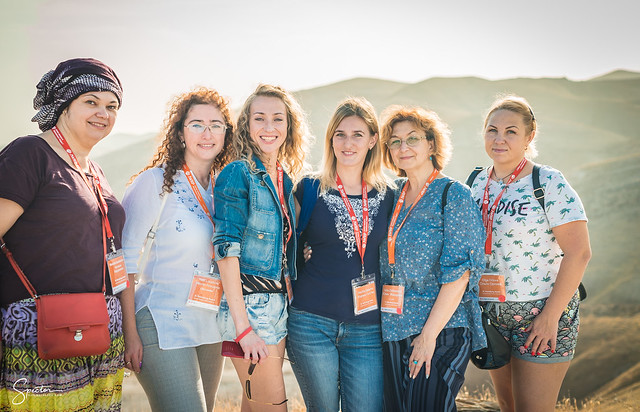 “When women apply for the MOMentum Year-Long Journey, they’re looking to grow spiritually alongside other women from their city,” said Eugenia. “They gain Jewish knowledge, they become more aware of Jewish tradition, and they begin to view the world through the prism of their Jewish heritage.”

During MOMentum Trips, Russian-speaking American women join the St. Petersburg women, sharing their experiences with one another and finding comfort in their commonalities. Once they return home, Momentum sisters participate in a biweekly Jewish Women’s Club, which is led by Momentum Community Leader Nelly Lokshina and offers an array of educational, social, and volunteer programming. Momentum sisters also participate in various tzedaka projects, raising funds for needy children and purchasing matzah for poor families on Passover. Last winter, Momentum sisters created a coat drive, donating high-quality coats to local families.

The experience has proven to be life-changing for many Jewish women in St. Petersburg, who decide to enroll their children in Jewish and Israel programs, commit to giving tzedaka in new ways, and become Jewish lay leaders and professionals.

“Before my MOMentum experience, I never saw myself as a Jewish activist, but participating in the MOMentum Year-Long Journey brought me back to Jewish education,” said one Momentum sister named, Yana. “I became the director of a Jewish Sunday school, and even infuse Jewish values into my work as a psychologist.”